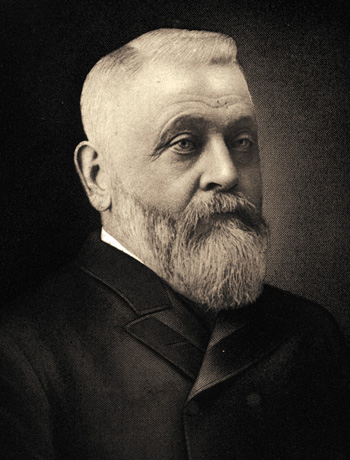 Conrad Seipp, an immigrant from Hessen Germany, started making beer in Chicago in 1854. His brewery was one of the few to survive the Chicago fire. During “The Great Rebuilding,” a period of intense innovation in urban development, business and architecture, Seipp provided Chicago his beer. By the mid-1870s, Seipp was a dominant player in the Chicago and national beer market, producing over 250,000 barrels annually. In his prime, Seipp was a pioneer of modern brewing. His innovations included new techniques in refrigeration, distribution, and marketing. Conrad Seipp died in 1890 and members of his family continued to run the company. Grain and coal shortages during World War I impacted Seipp’s production before the enactment of Prohibition in 1919 devastated the beer industry. Seipp operations shut down in 1933, just before Prohibition was lifted. The brewery was destroyed that year to make room for Michael Reese Hospital.

Seipp’s direct descendant has brought back the Conrad Seipp Brewing Company and in collaboration with Metropolitan Brewing is recrafting Seipp’s historic brands which include Seipp’s Extra Pale (a pre-prohibition pilsner) and Seipp’s Columbia (a dark lager first introduced at the Columbian Exposition of 1893). Seipp’s beer is about connecting with the past while enjoying the present.

How do you pronounce Seipp?

In German “e” before “i” results in a long “i” sound. This might help—Seipp rhymes with words like hype and type. To make it even easier just memorize this—believe the hype, Seipp is your type.

What types of beer did Seipp make?

We know of at least five styles produced at the Conrad Seipp Brewing Company. The Extra Pale and the Salvator (a double bock) were the best sellers. There was also a Hollander, an Export (the German version of an IPA), the Columbia (a beer made for the 1893 World’s Fair) and a near beer called Malt Sinew.

Why am I just hearing of Seipp now?